So, we now know that article 50 will be activated before March 2017 and chaos is ensuing! The pound has dropped (soon to be trounced by the Yuan after China joined the IMF), any trade deals are nowhere near ready and Theresa May really doesn’t give a stuff about the consequences as she’ll ignore pretty much any humanitarian disaster that befalls the UK to carry on the double scam of austerity and prohibition until the 2020 election.

Amid this malestrom, new chancellor, Phillip Hammond has given a speech in which he said the Brexit vote may cause “turbulence” and business confidence would be on a “bit of a rollercoaster” and that it was “common sense” to invest to support growth and jobs.

And he’s correct! Jobs only come with investment! I don’t see zero hours contracts cutting the mustard after so many years of asset stripping British industry.

He’s also heavily borrowing his policies from Jeremy Corbyn’s Labour, and the Tories are notorious for going back on thier word (as Jeremy Hunt has again today with £10mn worth of funding for GP’s not making it to them), I’ll take his rhetoric with a pinch of salt! 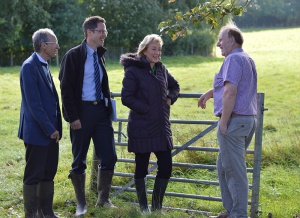 Andrea Leadsom has suggested that maybe young Britons could take part in Brexit by going fruit picking and ‘engage with countryside matters’. Again, I can kind of see where she’s coming from. My personal opinion is that there is a lot of opportunity for young kids leaving school to learn about countryside matters.

For instance, they may have an interest in the fact for the price of a couple of acres of land, they could be turning over £30,769.23 for hemp and £769,230.77 for legal cannabis per ACRE, per year, based on current American prices in the legal cannabis trade.

They could contribute to putting an end to MRSA making it to our supermarket shelves at the same time.

If they’re making that sort of money, they can then afford the new hike in student fees.

Some of them may be interested to know that courses for cannabis nurses are a tad cheaper;

A study released earlier this year has said that the UK would make £1bn per year from sales of cannabis.

These figures are talking of turnover of cannabis only. This report hasn’t taken in to account that cannabis has an economic multiplier of four. For every dollar spent on cannabis, three more are realised in the wider economy. That’s potentially a further £3bn pound going to the exchequer per year. And that’s just for recreational and medicinal markets. That doesn’t take hemp in to account. Something that really should be now that the costs of renewables is becoming so cheap as to render Hinkley obsolete before its even got started.

Colorado is currently turning over around $125mn per month, with an economic multiplier of four, this means a state of 5mn people, are currently experiencing $500mn worth of economic activity per month, from a single industry! To put that in to perspective, that $6bn per year is the equivalent of every person across the state of Colorado spending $12,000 per year.

Former Tory justice minister, Crispin Blunt, has spoken out about how he was told not to ask about the costs of prohibition as it could ‘unpick’ the status quo of drug policy if it were based on evidence.

Let’s take a look at that evidence.

The failed policy of prohibition which feeds the industry of criminalisation, according to a report by Transform, costs the UK £16.785 billion per year.

It costs £65,000 to imprison a person in this country once police, court costs and all the other steps are taken into account. After that it costs a further £40,000 for each year they spend incarcerated.

The Cost of Prisons

So a £17bn per year industry, benefiting only those who make and enforce the legislation. Meanwhile, we all miss out on an industry with the potential to bring almost (allowing for current American exchange rates) £61bn worth of industry!

An industry that has experienced explosive growth over the last couple of years!

According to marijuana investment group ArcView and financial data firm New Frontier, America’s legal recreational marijuana industry sold $998 million in 2015, up 184 percent from $351 million in 2014. Despite little to no access to banking services because of the plant’s federally illegal status,

Top performing sectors for 2015 were Cultivation & Retail, up 167.4%, and Infused Products & Extracts, up 17.9%. This performance is indicative of the growth in the number of cannabis grows and dispensaries in existing/newly legal states, and the resulting revenue and market share growth of the underlying companies in these sectors.

An industry with thousands of well paid jobs!

Marijuana Businesses Now Employ Over 100,000 People in the United States

“What are the opportunities?” said Bocskor. “Financial services, software services, security services, buyer services, manufacturing of parts for the industry every step of the way, retail-specific, cultivation-specific, processing-specific, laboratories to do the testing, marketing, industry-specific advertising agencies,” plus biotech, pharmaceuticals and hemp.
“All of these surrounding businesses that you see whenever you see an industry that has the type of growth and tailwind that this industry does.”

An industry unaffected by downturns in others industries!

Something the police may want to keep in mind at a time when the Tories have said they want to cut police funding while wishing to expand private security officers.

The Tories have said they want to cut police because of a supposed drop in crime. Yet despite huge drops in crime rates across legal states such as Colorado, they’re investing in their police rather than cutting them!

If you want bobbies on the beat, have some hemp on your street!

Austerity is a sham! Prohibition is a lie!

If Britain is to Brexit, then it needs something to build on! Cannabis built Britain! It can rebuild it!